How to keep Buxus healthy.

How to keep Buxus/Box plants Healthy?

Why are Buxus popular. 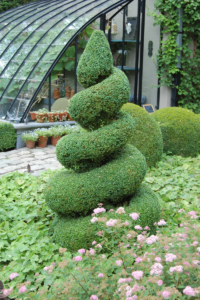 Buxus are beautiful in a garden whether in pots or as part of beds. They have been used for years in any style garden whether mixed into flowing borders or in a more formal type garden.  Over the last number of years, they’ve become particularly popular as statement plants framing front doors or entrances. Buxus have great structure, they are evergreen. Buxus also come in many shapes such as cones, balls and many more theatrical designs like the spiral shown here.  They can be clipped regularly, so they can keep their really neat and tidy look all year round.  They was no pest or disease problems for many years. However in recent years the plant has been come under threat and large scale planting in certain parts of the world have had to be destroyed.

Whats Happening To My Buxus? 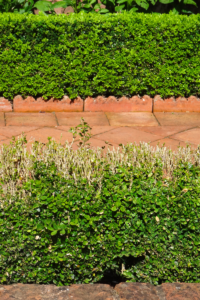 As I always say here at Master My Garden healthy plants are less susceptible to disease so that is our number one priority to keep our plants healthy.

The first sign of  box blight is the brown spots on the leaves. The second phase is that the leaves turn grey and fall off. The third sign is that you have bare patches on your plants. If you have Box Blight remove any infected plant material both leaves and stems and burn if possible. The follow the plan below to treat or prevent Box blight.

How To Keep Buxus Healthy.

I often see beautiful Buxus plants suffering badly from neglect in pots. In some cases these plants are fully dead from this neglect. This should not be the case, they are easy to care for.

In pots use a good quality growing media I recommend topsoil mixed with grit and some organic matter like farm yard manure. I also reccomend adding Biochar and seaweed meal to this mix. You need to provide Buxus in pots with as good a condition as they would get in good garden soil.

Buxus planted in the ground.  Mulch this ground once a year with organic matter to feed the soil.  This will ensure the Buxus is growing strong with lush growth. If you can’t mulch or you are growing in pots feed the Buxus 2-3 times per year to give the same growth. Again building a healthy plant to start with.

Then use Topbuxus Health Mix as a foliar spray once a month during the months March through to October. Topbuxus health mix developed by Dutch Nursery owner Adrie van Dun. Adrie developed this mix to solve box blight problems because his nursery solely produces Buxus and a solution needed to be found. So Adrie after many years of trials developed Topbuxus health mix and it is a great solution to Box blight but also in my eyes an essential tool in keeping Buxus healthy.

Topbuxus health mix comes in a little tablet. You dilute the tablet in a liter of water and apply as a foliar spray treating 10 square meters. It is a health mix with many elements but is not chemical based so is safe to use in all settings. Treat Box Blight with Topbuxus health mix use once a month from March to October. This gives both preventative and curative action.

Clip Buxus regularly, for balls, cones etc 1-2 clipping a year is enough. If you are doing the clipping always sterilise the blade of your shears before starting. This prevents the spread of disease. If you are bring in a gardener to do the clipping ensure they also sterilise before they start to work on your plants to ensure they don’t bring in disease from outside.

In very recent year the Boxwood caterpillar is also starting to become and issue. Where it was once isolated to certain areas of Europe it is now widespread in the UK and in certain parts of Ireland. The Boxwood caterpillar has the same effect as cabbage caterpillar eating the leaves and in some cases causing widespread damage.  TOPBUXUS Anti Rups is the treatment to use Boxwood caterpillar. Available in most countries although  it is still not registered in Ireland. If you have a large collection of Boxwood it may be wise to use a Box moth trap. This identifies if you have the moth present and if you do then you need to treat with TOPBUXUS Anti Rups.

So to keep your Buxus healthy it’s simple. In pots start with the right growing media. Then in garden soil and pots feed regularly to keep the plants growing strong. Then use Topbuxus health mix as I recommended above.  Remember healthy plants are less susceptible to disease.

Buy Me a Coffee

Buy Me a Coffee